Getting to know graphical blocks

Layout: Blocks with top side flat and a small protruding triangle underneath.
Characteristics: No blocks are connected on the top side while other intermediate blocks may be connected in the bottom.
Function: Start.

Layout: Blocks with small triangular dent on the top side and a small protruding triangle underneath.
Characteristics: Connect other blocks on the top and bottom side.
Function: Expression, Say, etc. 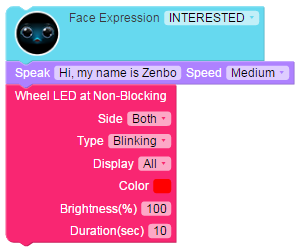 Layout: Blocks with a small protruding trapezoid on the left side to connect other blocks.
Characteristics: Usually as blocks with variables or conditional inputs.
Function: String, Speak Volume, etc.

A variety of blocks are listed here to describe their important features :

Ensure to use start block as the beginning block of a program sequence. 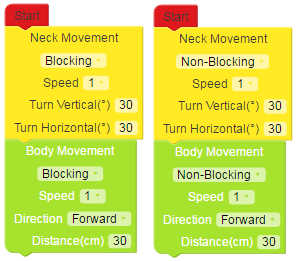 With ListView activated, Zenbo will send out a voice prompt for user to issue a command. Zenbo will display the hint screen if no response is made within the 12 second lapse as shown by the Interface Tips block in Fig. 20.

Combine these two blocks to apply a conditional input.
Example as shown below:
Run an action when the battery power reaches a certain level, or run a task when the user speaks certain speech strings, etc.