Assign a unique ID for each Intent. Please use English or numeric letters as Intent ID.

Choose Intent’s language. Suggest choosing correct language. The term “Detected By the System” means that the type of language will be set dynamically according to the sentences importing. 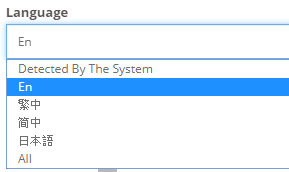 List all the potential sentences that user will/might say to trigger the Intent.

You can keep original value (e.g. Taipei) or add it to existed Concept. Apart from this, you can also create a new concept from the original value. As the following example, “Taipei” is set to be concept “Concept_City”.

After referring a concept, a blue tag will be transformed into a orange tag. In the following example, “Concept_City:City_Belief” means that this term refers to concept Concept_City and assigns to a belief CityBelief. The functions in the menu are described below.

In addition, designers can also refer the concept by typing “@” and choose “Ref Class” to see all existed Concepts that you can use.

Click icon “L” to see all the recommended sentences that you might want to add. Note that it is based on the last sentence to generate recommended ones.